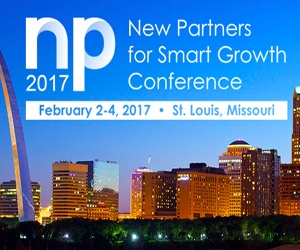 The 2017 New Partners Conference is heading back to the midwest, to the gateway to smart growth – St. Louis, MO. Its iconic Gateway Arch honors the 19th-century explorations of Lewis and Clark and America’s westward expansion, and today is a beacon for the region’s 21st-century innovations in technology and sustainability.If you haven’t been to St. Louis lately, the New Partners for Smart Growth Conference in February 2017 will give you a fresh look at what’s new. See first-hand why Popular Mechanics called St. Louis the #1 Startup City in America.

A new generation of entrepreneurs, scientists and investors have emerged making the “Gateway to the West” one of the country’s burgeoning technology and innovation hubs as the region booms with high-tech, innovation centers and more than 1,000 start-ups – a third of those in biotech.

The St. Louis metropolitan area is the 19th largest in the U.S. with a population of nearly 3 million, stretched across 15 counties in Missouri and Illinois.

One of the most bike-friendly communities in the nation, St. Louis’ Cycling Initiative, honored by the U.S. Conference of Mayors, promotes safe, convenient bicycle access throughout the city. St. Louis has approximately 90 miles of bike lanes, routes and trails within city limits, a third of its arterial streets have designated bike lanes, and a 1,400 square-foot bike station in the downtown helps link bicycling commuters to transit. When completed, the Gateway Bike Plan will provide residents with more than 1,000 miles of bike lanes, shared-use lanes and other bike facilities throughout the St. Louis region.

Its award-winning Sustainable Neighborhood Initiative was launched in 2013, and is accompanied by a how-to Sustainability Toolkit and mini-grants for creating innovative sustainability projects in the neighborhood. Meanwhile, the Sustainable Land Lab tests ideas that reframe vacant land as an opportunity to rebuild neighborhoods into resilient, vital communities.

St. Louis requires all new municipal buildings to meet energy-efficiency and green-building standards. With its Habitat for Humanity developments, St. Louis has one of the highest levels of LEED Platinum homes in the country and also ranks among the highest for rehabilitating historic buildings.

Through its Urban Vitality and Ecology Initiative, St. Louis has embraced the greenspace of its parks, trees, trails and other natural areas to provide important community gathering spaces and shape neighborhood character. Along with the social benefits, connecting people to urban nature also fosters economic resilience, higher property values and environmental savings (such as millions of City dollars in avoided stormwater costs).

A significant factor in this event’s tremendous success is its appeal to so many different disciplines. The conference will draw a national audience of local elected officials and city and county staff; state and federal agency leaders; professionals in planning, transportation, public health, landscape architecture, architecture, public works, parks and recreation, and crime prevention and the arts; realtors, developers, builders and bankers; advocates for equity and environmental justice, youth, older adults, and walking and biking; labor representatives; school leaders and staff; environmentalists; and all others committed to building safer, healthier and more livable communities everywhere.

The nation’s largest smart growth and sustainability event, the theme for the 2017 conference is “Practical Tools and Innovative Strategies for Creating Great Communities,” underscoring a stronger emphasis on implementation tools and strategies, and new technologies that will help communities NOW! The program will span three full days with post-conference events scheduled for Sunday, February 5. The main program will kick off on Thursday morning, February 2, with a plenary starting at 10:00 am, and continue through Saturday afternoon, closing at 4:00 pm. The schedule includes a dynamic mix of plenaries, breakouts, implementation workshops, focused training sessions, peer-to-peer learning opportunities, and coordinated networking activities. It will also feature exciting tours of local model projects in and around the greater St. Louis region.

There will be something for everybody, from veteran experts to smart-growth novices, with over 75 sessions and workshops to choose from. Learn from hundreds of speakers who cross disciplines to share insights, valuable tools and strategies for making smart growth a success in your community. The program will be infused with sessions and case studies focusing on important social equity and environmental justice issues.