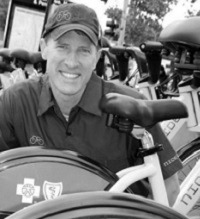 Bill Dossett worked in commercial litigation for 15 years before deciding to leave without a job or a plan for what he would do next. After a conversation with the mayor of Minneapolis, he agreed to help the city launch one of the first bikesharing systems in the U.S.

Today he serves as executive director of the highly successful Nice Ride Minnesota bikesharing system. He is also president of the North American Bike Share Association (NABSA). NABSA’s annual meeting this coming September will be conducted in partnership with SUMC’s 2015 Shared Mobility Summit in Chicago.

The following is a lightly edited version of the Shared-Use Mobility Center’s conversation with Bill Dossett. In each issue of SUMC’s newsletter, we will profile a different shared mobility innovator.

What was it like to dive into launching Nice Ride Minnesota?

My personal challenge was to figure out how to make bikesharing work in a U.S. city, knowing that if I screwed up it would hurt momentum in a movement that I cared deeply about. There was a lot of skepticism about bringing a European program like bikesharing to the U.S. That’s totally changed, thanks to Nice Ride Minnesota as well as programs in cities like Denver and Washington, D.C. The skepticism has been replaced by demand. Now bikesharing and bike infrastructure have become a critical part of being a first class city.

What trends are you seeing in the bikesharing industry?

The most exciting trend is the overall increase in urban mobility options. I think we’re also about to see big changes in how we pay for bikesharing, such as transitioning from credit cards to mobile apps and integrating payment with transit fare cards. Integration with mobile phones and mobile apps is just huge. It’s an issue we’ve also been focusing on through NABSA.

How does bikesharing tie in with the larger concept of shared-use mobility?

Bikesharing has been operating in the Minneapolis area for four years. After Car2Go launched, we had by far our best year. It’s because bikesharing and carsharing work so well together. They work better together. We’re still in the stage of getting people to understand that transportation doesn’t equal a car. Once they get the big picture, once they realize that as a family we don’t need to own two cars – or even one car – that’s how we change the world.

What are Nice Ride Minnesota’s plans for 2015?

We’re reached the point that we’re at or beyond the geographical boundaries of a logical bikesharing system. Now we are looking to increase density. Our focus is also moving to some new concepts we’ve been trying in small cities and suburbs, like our Nice Ride Neighborhood program, which launched last year.

The idea with Nice Ride Neighborhood is to give a person a bike for a season, May to October, to help introduce them to biking. But you don’t just give them the bike. You give them an orientation, you show them the best places to ride in their neighborhoods, you connect them with neighbors and friends who ride, so they don’t have to make these changes alone.

What other ideas is Nice Ride exploring?

We’re working with local hospitals on a “prescribe a bike” program. We’re also trying a lot of different strategies to help reach low-income communities. One approach that has seemed to work well is to start out by finding people who are the best match for bikeshare. If I can find a young student who needs to get downtown for work or school and get them a bike, they will ride for the rest of their lives.

How have you made bikesharing successful in a city that’s famous for having brutally cold weather?

We shut down our systems at the end of daylight savings time. It basically snows the next day after that. Biking conditions in winter are incredibly hard. However, cities like Chicago and Denver have proved it can be done. We are considering the idea of operating year round.

What are your hobbies outside of work?

I help with a lot of local charity events, like a big ski race and winter festival that we put on every year. Mountain biking is my first joy.