The bikesharing industry has grown significantly in the past two years, becoming a major presence both in shared mobility and in cities across the nation. Evidence suggests that growth will only continue. A recent report predicted that the bikesharing sector is likely to be worth $6.3 billion worldwide by 2020.

Shared modes like bikeshare, carshare and public transit work best when they complement one another, providing a robust network of mobility options that allow riders to get from point A to point B without needing a car. That’s why we are so excited to see the recent growth in the bikesharing industry – and to consider its potential in years to come.

From the launch of major new systems to important advances in technology, 2014 was a banner year for the bikesharing industry. Within the last 12 months, new programs launched in several major U.S. cities including Miami and Seattle according to publicly available data (Fig. 1). In all, 10 major systems began operations in 2014, ranging in size from two to 118 stations. 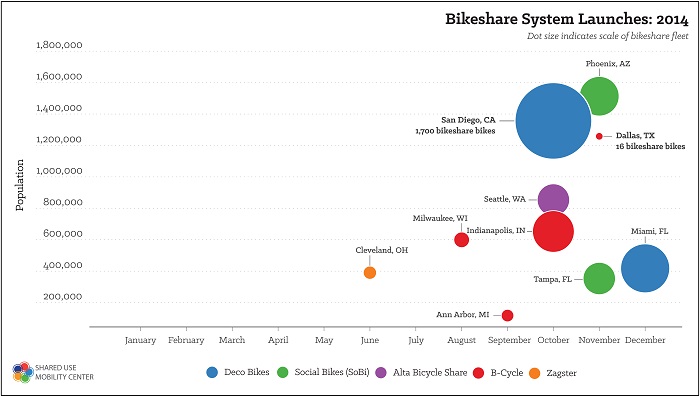 (Note: San Diego’s bikesharing program has been delayed until early 2015)

The previous year kept about even with the pace of growth in 2013, which saw the launch of 11 total systems including the two largest systems in the nation in New York City and Chicago (Fig 2). 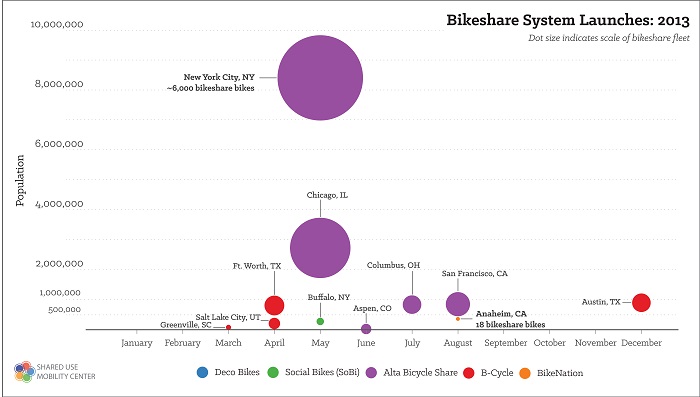 Things are shaping up to be even busier in the years ahead. Currently, more than 25 systems are planned for launch through 2016. Several of the largest existing systems have also announced plans for expansion in 2015, including in Chicago, New York and Washington, D.C.

Jay Walder, CEO of Motivate (formerly Alta Bicycle Share) recently announced plans to double the size of New York City’s Citi Bike, from 6,000 to 12,0000 bikes, by the end of 2017.

As the bikesharing industry has grown, it has also continued to evolve. Trends to watch in 2015 include:

•    Advances in addressing bike social equity: Organizations like Slow Roll have made great strides in both promoting bike culture in diverse communities and advocating for equity in bike infrastructure. Recently, SUMC has been working with Slow Roll Chicago President Oboi Reed on pursuing creative solutions for expanding bikeshare on the south side of Chicago. SUMC will also be working on a report later this year exploring best practices shared mobility operators can use to address equity issues.

Equity in bikesharing also came to the fore in 2014 thanks in part to reports from Living Cities and the Transportation Sustainability Research Center at U of C, Berkeley. Additionally, thanks to the Better Bike Share Partnership, Philadelphia’s forthcoming bikesharing program is expected to make significant strides in serving low-income riders in 2015.

•    Maturation of the industry: Major bikesharing systems such as New York City’s and Chicago’s experienced significant membership growth in their second year of operation. This past year also saw the founding of the North American Bike Share Association (NABSA), which will provide guidance for communities looking to join the 60+ municipalities in the U.S. that now have bikesharing systems.

•    Growth of flexible bike-sharing concepts: New technologies like Bitlock allow users to pick up and drop off bicycles without the need for expensive docking stations, making it easier for smaller communities to launch and operate bikesharing programs of their own. The market for peer-to-peer bike-sharing is also heating up in cities like Austin, where Spinlister recently announced plans to circulate 1,500 bicycles ahead of SXSW in March 2015.

Why Bikeshare Matters for Shared Mobility

Bikeshare systems, with their easily recognizable bikes and infrastructure, have become one of the most visually identifiable modes of shared transit. But their importance extends far beyond serving as a poster child for the shared mobility industry.

As noted earlier, bikeshare plays a vital role in complementing other modes of shared mobility. According to the University of California, Berkeley’s recent study, bikeshare systems help to expand and establish new connections within public transit networks – especially in more dispersed communities and small to mid-sized cities without dense urban cores.