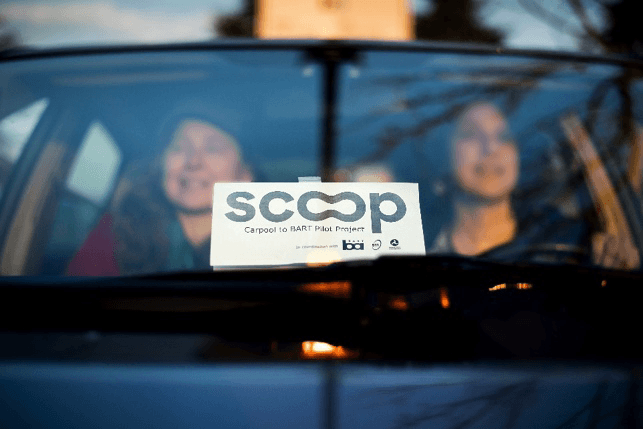 Carpooling in California: My experience taking Scoop to BART

—Bay Area Rapid Transit (BART) has partnered with Scoop Technologies, a ride-matching company, to entice people to carpool to select BART rail stations. The service is designed to improve the efficiency of BART’s parking facilities and provide affordable options to access the stations. While in the Oakland area in early October for BART’s On-Ramp project, I had the opportunity to try ‘Scoop to BART’ for myself, an enjoyable experience and my first time riding a service in the MOD Sandbox program. 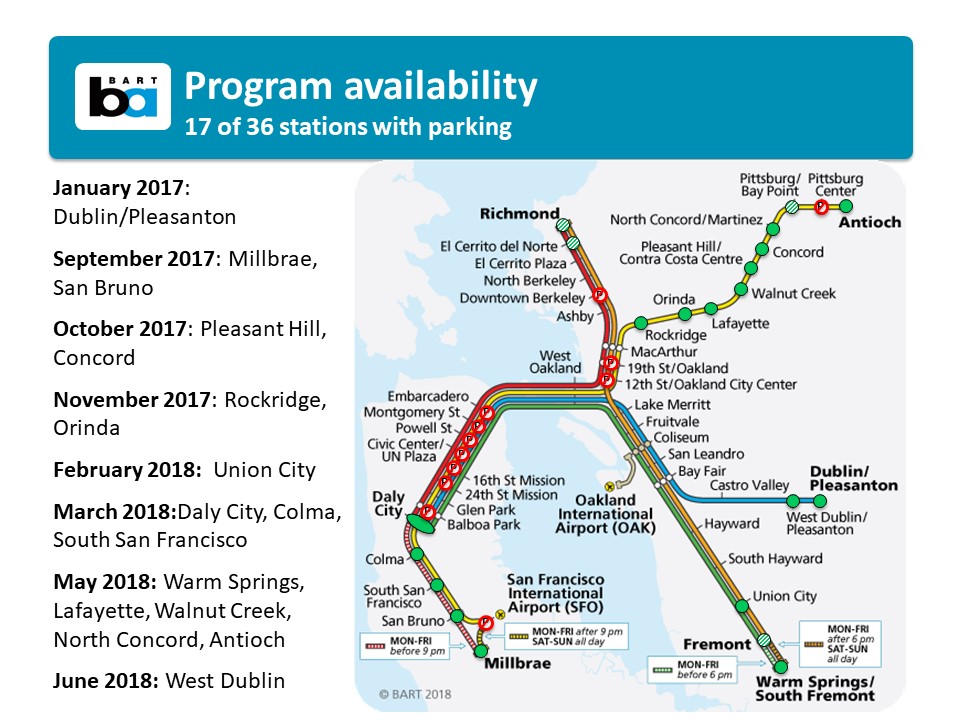 Scoop to BART is available at the stations in green.

Scoop makes an app for commuters to ask for or offer a ride to their destination by 9 pm the day before the morning commute or by 3 pm for an afternoon/evening commute. The app notifies riders and drivers if there’s a match and provides maps and navigation features similar to those we’ve grown accustomed to in other apps. The riders pay a nominal amount through the app to cover driver expenses and $1 fee to Scoop.

Adapting this service for the partnership was easy. Commuters list an eligible BART rail station as their destination in the Scoop app. In turn, commuters get guaranteed parking until 10 am—a good perk because many BART parking facilities fill up before 7 am! In theory, this provides commuters, especially those driving to BART stations, more flexibility while giving BART a way to bring more people into their system without adding additional parking facilities. Here’s a simple animation of what requesting a trip looks like:

On Monday morning, I decided to give the service a whirl. I had been visiting my cousin’s family in Palo Alto, so my first ride request was from Palo Alto to the Millbrae BART station. There I planned to take the transit service to BART’s headquarters in Oakland. I put in my request early Sunday evening, but the app notified me later that night that I didn’t receive a match with any drivers. Disappointment! But in hindsight, that route is directly parallel to the CalTrain rail service which connects to BART at Millbrae, so perhaps this is not a high-demand route.

Undaunted, I tried again the next day, requesting an evening trip from the Dublin/Pleasanton BART station to a restaurant a couple of miles away. I put in my request just before 3 pm, and…. Bingo! I got matched with Rajeev, who had given over 700 rides to over 200 different people. I was to meet him at the station at 7:25 pm. At first, it was difficult to find Rajeev, but after a bit of phone tag, we connected, and he picked me up near the station area.

After we sorted out a few navigational items, Rajeev was happy to share his thoughts about the Scoop to BART service. Though he got paid for each ride to cover commute costs, he wasn’t in it for the money. Instead, the incentive for him was the guaranteed parking. He lamented the lack of available spaces after 7 am, and providing carpool rides were a way for him to maintain flexibility in his day. He’s a business owner who works from home, not a daily commuter, so Scoop to BART allows him to travel on his own time. He also expressed support for the service as a way to reduce the environmental consequences of driving.

However, he did have some feedback for improving the service. Our trip from the station took me to my restaurant, which was in Pleasanton, south of the station. But Rajeev lived a few miles north of the station, in Dublin, which created a circuitous journey for him, likely doubling or tripling his total driving time.

He also reported providing many more trips in the morning than in the evening. Indeed, the data BART receives from Scoop shows that the vast majority of Scoop to BART carpools occur in the morning; BART doesn’t require an evening carpool to receive the guaranteed parking incentive. Rajeev thought that BART should consider this, although he noted that the ride home might be more difficult for BART and Scoop logistically.

My experience shows the great benefit of the Scoop to BART service. Increased mobility with economic and environmental benefits are a huge upside, and other agencies should think of ways to find and leverage these types of incentives to entice people toward more efficient travel choices that create an efficient, multimodal transit system and help them conquer their commute. Some encouraging thoughts from BART’s project lead Jumana Nabti below:

However, despite the popularity of the program, BART has indicated that they will not continue with Scoop after their contract ends this spring. Instead, they have opted to integrate carpool parking payment and verification as a function in their new agency app. This is driven by Scoop wanting to charge BART monthly as a way to generate revenue, amounting to significant recurring costs, but without additional features to improve the effectiveness of the program, such as verifying shared rides to prevent fraudulent use, serving additional locations and non-commute trips, and incorporating parking payment and accessibility features into the app.

While it is certainly understandable for a private company to want to make a product offering financially sustainable, and while frictionless carpool-to-transit provides substantial benefits to riders, services like these need to be sustainable and effective from the providers’ end in order to be a longer-term solution. Hopefully, BART’s planned carpooling program through their own app will be as seamless to use as Scoop, especially as BART intends for riders to be able to use any carpool matching app or service, including Scoop, to get to BART.